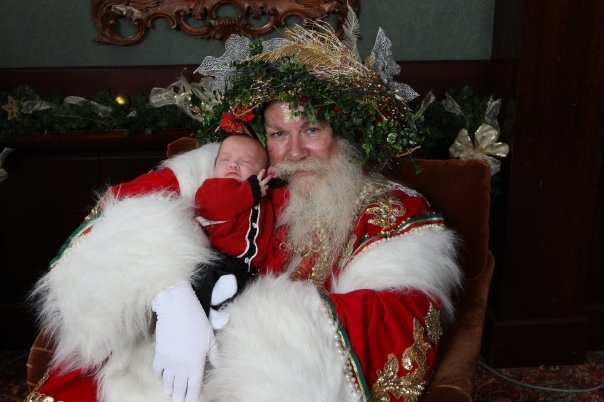 The featured photo is my sons first photo with Santa Clause, in 2008. In this picture he is five months old and almost weighed seven pounds.

My son’s first Christmas did in fact cost over $1.6 million US dollars. Fortunately for our family, we were double insured when when my son was born. Our insurance companies picked up most of the tab. You might be asking yourself, how and the heck did it cost so much for your son?

Grab a snack and a soda and I’ll tell you…

When my wife and I found out we were expecting, our due date was November 2nd. Everything during the first 5 months of the pregnancy was normal and had no red flags from our doctors. What you are about to read is 100% fact and nothing had been polished to make a better story.

I was working as a chef at a private golf course and my wife is a paralegal for a law firm. She works days, 9-5ish. My schedule usually has me working on Wednesdays because it is men’s day and they get busy. On Wednesday July 16th, 2008 I actually had the day off so I could work the tournament that weekend.

A few minutes before 7am on Wednesday July 16th, 2008 my wife got up and went to the bathroom. While rubbing her eye with one hand as she came back into the bedroom, she mumbled there was a little blood in my pee. I asked here what that meant and she said, “Well, it’s not normal.”

I knew I had the day off so I had a previous commitment to take care of that morning. I was to shuttle her parents to the airport. They were flying to Huston, TX to referee a National Karate Tournament. I needed to drop them off by 9:15am.

My wife tells me that her doctor’s office didn’t open to see if she could get an appointment until 8:30am. She said she was going to go in to work a little early so she could check messages and get the office open.

She went her way and I went mine. I got over to the inlaw’s house to park my truck so I could drive their Lexus, something that would fit everyone and their luggage. I made it to the airport, dropped them off and parked at the hotel across from the Sea-Tac airport.

I called my wife to see if she was able to make an appointment or not. She then tells me, the only thing in my 45 years on this planet, something I can’t explain or understand. She told me when she called the doctor office to see if they could fit her in today, because she didn’t think the blood in the pee was normal, that… they already had her scheduled at 10am.

My wife didn’t make that appointment. She didn’t get a call from the doctor’s office reminding her about the appointment the day before and the 16th didn’t fall on one of the normal routine appointments. Anyhow, she told the lady she was on her way.

All of my stuff was in my truck and I wanted to take the Lexus back and get my truck before I headed over to meet my wife at her doctor. For a split second the devil on my left shoulder poked me and said, “What are you thinking man, you are in a nice Lexus. Let’s take it for a cruise! Nobody will ever know…”

I got back on the road before the angel came out to argue and headed for Valley General Hospital in Renton, WA. I arrived a few minutes after 10am and headed up to the 4th floor.

When I got there my wife was laying down with a baby heart monitor on. She greeted me and I asked her what was up? She told me that her doctor had to do an emergency C-section for another patient and would come see us next. She also told me that the baby’s heartbeat was fine they just wanted to monitor it.

To a nervous person, waiting and not knowing is horrible. Waiting and not knowing in a doctor’s office is even worse. 20-25 minutes later(1-2 hours in nervous time) her doctor came in. She talked with my wife and asked her a few questions. The doctor then told us she was going to fire up the ultrasound and take a look at what is going on with our baby.

In about 2-3 minutes the doctor calmly sets the ultrasound ward down, gets up and leaves the room without saying a word. Almost at the same time my wife and I look at each other with looks on our faces like what the fuck was that?

Almost as quickly as she left, the doctor came back into the room. (timeout…)

Something so important is happening right now, that the doctor doesn’t feel she has the time to sugar coat anything or beat around the bush. The next few words that came out of her mouth have been branded into my memory forever. The doctor says, “You are having a baby today. You are fully dilated. Do you want to try natural child birth of do a C-section?” My phone said it was 11:56am.

What the fuck just happened? I am confused here. I thought our baby was due on November 2nd. This is the middle of July. They put my wife in the chair and take her away, leaving me there shaking my head like bobble head.

My phone had about 14% left and my charger is in my truck. Way to go mister lets take the Lexus for a cruise. All of my change and quarters for the payphone are in my truck and you have to buy something to get change in the gift shop. I made two quick calls. One to my parents got no answer so I left a message. The other to her parents. I knew they were on a plane to Huston so I left them this message, “Huston, we have a problem! It’s not the Lexus, you’re grandparents.”

I haul ass from the only payphones in the hospital to get in my gown. When I get to where you suit up, the lady there tells me that I missed it. She also told me in a few minutes we would have a room in the NICU (neonatal intensive care unit). Again what the fuck just happened? It’s has only been 14 minutes since you wheeled my wife out of the doctor office. It has to take at least 4-5 minutes just to walk her, then prep, scrub and whatever else they do. All of that and have the baby in 14 minutes. I think he was 11 inches and weighed 1 pound and 11 ounces. The doctor’s were giving him a 13% chance to survive.

Maybe another day I’ll share what happens next. I will tell you with the surgeries, therapy, appointments and… 102 days in the NICU before we could take him home. The total cost billed from the hospitals was over $1.6 million by Christmas in 2008.

I think he was just under 6 pounds when we got to finally take him home in November. Almost a month later in the featured photo with Santa and he only gained a a single pound. He’s our miracle.