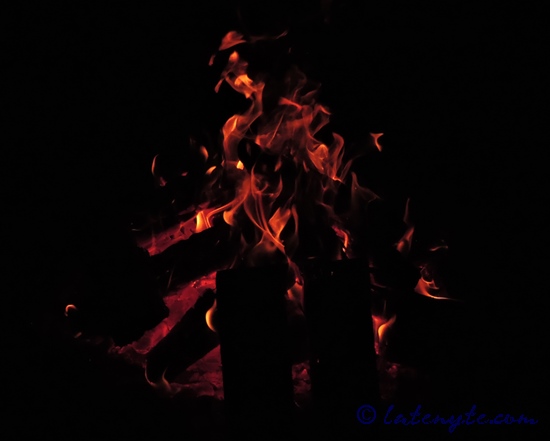 As I wrote yesterday, I left for the mountains a bit later than I would have hoped.  I wanted to run a few errands before I headed out of town.  I made it to FSRD 70 by 2:30PM and the gated road to get to Location #1 a few minutes later.  I wouldn’t have even went up the road if I would have seen the gate from the satellite imagery.

Before I left I took one more peak at google earth (you can zoom in further) and found another anomaly before Location #2, right by the main road. It was very similar in size and shape of the WTF? target at Location #2.  I had it as a backup plan/check this out spot in case Location #2 was snowed in.  Here is the satellite image of the backup anomaly.

There was a gate going up to this anomaly but I got a glimpse of it from the road.  What ever it was had a black chain link fence around it.  It was also in really good condition from what I saw as I drove past.

I thought I would move on to my next target.  On the way up to Location #2, I pass a huge gravel pit I wanted to check out.  It is a site where you can collect nice basalt crystals.  Unfortunately there were about 20 vehicles of folks up shooting.  Since I wasn’t going to get to grab a few crystals I kept driving towards Location #2.  As the road climbed above the gravel pit is began to snow.  The paved road was fine as far as clear and wet, but the snow falling was beautiful.

I made it up to the 2630′ sno-park  by 3:30PM.  I peaked around and decided to just camp there off the road.  It was a safe elevation to camp as it was below pass level and better chances for less snow accumulation.  The featured photo for this post was shot Saturday night at the camp fire.  This image is an overhead map of the stops I made during this trip.